For those who loves classic video games nothing says delightfully nerdy like a vintage video game T-shirt. If you are absolutely in love with old gaming, chances are that there are tees based on your favorite video game.

So, without further ado, enjoy our the top 10 of Vintage Gaming T-shirts: 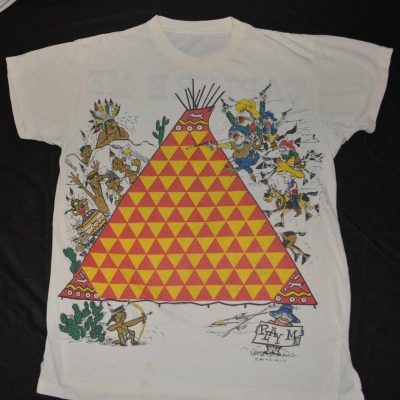 About game: In this cowboys and Indians game you have been appointed sheriff of a wild west town that is under siege from Red Indians who have taken to hijacking stagecoaches and the local railroad to drive the whites from their traditional lands. Europeans and Red Indians, first came into contact in the 16th century, and the Indians were at an immediate disadvantage as they had no knowledge of metal working whilst the Europeans had guns. Despite this, and contrary to popular belief, the Indians were actually quite impressed with the European arrivals admiring their style, housing and farming methods, so when the American War of Independence started, they found themselves supporting the British and therefore ending up on the losing side. This sparked the real beginning of antagonism between the cowboy and the Indians which is played out in this game where the Indians attack the railroad and you have to protect it and maintain order. 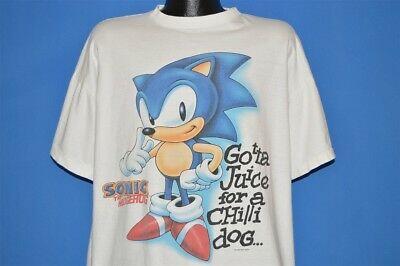 About game: Sonic the Hedgehog is a video game franchise produced by Sega centering on a series of high-speed platform games. Sonic, the protagonist, is an anthropomorphic blue hedgehog with supersonic speed. Typically, Sonic must stop antagonist Doctor Eggman’s plans for world domination.

The first Sonic the Hedgehog game, released in 1991, was conceived by Sega’s Sonic Team division . Its success spawned many sequels and helped Sega become one of the leading video game companies during the 16-bit era of the early 1990s.

About game: Pac-Man is an arcade game designed by Toru Iwatani and published by Namco and Midway Games. It was initially released in Japan as PUCKMAN in May 1980, followed by the United States in October of the same year.

The gameplay involves the titular character in an enclosed maze filled with individual dots, or pellets. The goal is to consume all of the pellets while avoiding four multi-colored “ghosts” that wander around the maze. As the levels progress, the ghosts progressively become more aggressive, changing their behavior and patterns. If a ghost touches Pac-Man, he loses a life, which can be regained at certain point values. The maze also contains four large “power pellets”, which gives the player temporary invulnerability, allowing them to consume the ghosts to earn more points.

About game: Street Fighter commonly abbreviated as SF or スト (Suto), is a fighting video game franchise developed and published by Capcom. The first game in the series was released in 1987, followed by five other main series games, various spin-offs and crossovers.

Game was designed by Takashi Nishiyama and Hiroshi Matsumoto, debuted in arcades in 1987. In this game, the player plays as martial artist Ryu, who competes in a worldwide martial arts tournament spanning five countries and 10 opponents. A second player can join in and plays as Ryu’s American rival, Ken. The player can perform three punch and kick attacks, each varying in speed and strength, and three special attacks: the Hadouken, Shoryuken, and Tatsumaki Senpukyaku, performed by executing special button combinations. Street Fighter is one of the highest-grossing video game franchises of all time and serves as the company’s flagship series.

About game: Silent Service is a submarine simulator video game designed completely by Sid Meier and published by MicroProse for various 8-bit home computers in 1985 and for 16-bit systems like the Amiga in 1987.

Silent Service is set in the Pacific Ocean during World War II, with the player assuming control of a U.S. submarine for various war patrols against Japanese shipping. The game allows the player to choose when to attack and a whole range of realistic tactics are available.

About game: Centipede is a vertically oriented fixed shooter arcade game produced by Atari, Inc. in June 1981. The game was designed by Dona Bailey and Ed Logg. It was one of the most commercially successful games from the video arcade’s golden age. The player fights off centipedes, spiders, scorpions and ants, completing a round after eliminating the centipede that winds down the playing field.

About game: Asteroids is a space-themed multi directional shooter arcade game designed by Lyle Rains, Ed Logg, and Dominic Walsh and released in November 1979 by Atari, Inc. The player controls a single spaceship in an asteroid field which is periodically traversed by flying saucers. The object of the game is to shoot and destroy the asteroids and saucers, while not colliding with either, or being hit by the saucers’ counter-fire. The game becomes harder as the number of asteroids increases.

About game: Teenage Mutant Ninja Turtles is a 1989 side-scrolling platform game for the Nintendo Entertainment System released by Konami.

Alongside the arcade game, it was one of the first video games based on the 1987 Teenage Mutant Ninja Turtles animated series, being released after the show’s second season.

The Ninja Turtles (Leonardo, Raphael, Michelangelo, and Donatello) are on a mission to retrieve the Life Transformer Gun from Shredder, a device that could restore their sensei Splinter back to his human form.

About game: Resident Evil is a survival horror video game developed and released by Capcom originally for the PlayStation in 1996. The game’s plot follows Chris Redfield and Jill Valentine, members of an elite task force known as S.T.A.R.S., as they investigate the outskirts of Raccoon City following the disappearance of their team members. They soon become trapped in a mansion infested with zombies and other monsters. The player, having selected to play as Chris or Jill at the start of the game, must explore the mansion to uncover its secrets.

About game: Raiders of the Lost Ark is an action-adventure game created for the Atari 2600 based on the movie of the same name (the first installment of the Indiana Jones series). The game was designed by Howard Scott Warshaw.

The player controls Indiana Jones as he searches for the lost Ark of the Covenant. The video game is set in the city of Cairo in 1936.

Those gamers who prefer magic items, puzzles, and thoughtful play mixed with arcade movement should find Raiders well worth the price.

All pictures from eBay and WyCoVintage.

Our #1 priority is your happiness. If you have a problem, we’ll solve it.  Small and large businesses love Merch38.